Rated PG by the MPAA – contains violence, some grisly images, and some scary moments.  The smoking caterpillar is incidental

It has been plain, from the moment initial word of this project landed, that Tim Burton would add something unique and twisted to Wonderland.  He has not disappointed visually, with a rich and vibrant world featuring all manner of Lewis Carroll’s original creatures.  What is, perhaps, slightly disappointing is that the film never transcends Wonderland and the odd assortment of creatures and behaviors therein.  Nevertheless, Alice in Wonderland is not a bad film, and is in fact rather good and fairly enjoyable.

There is a story to accompany Alice and her adventures.  Alice’s Adventures in Wonderland purists need not be worried, as the film acts as a sort of sequel to any previous events.  It is set as Alice (Mia Wasikowska) approaches her twentieth birthday.  Her father, a great businessman and explorer, has died some years prior, and she and her mother are on their way to a grand party thrown by nearby aristocrats.

There are strict rules and regulations regarding her behavior at such events, but Alice’s mind often wanders off and becomes distracted.  During a particularly painful point in the social gathering Alice wanders off, following a white rabbit in a waistcoat.  She soon finds herself tumbling down a rabbit hole, landing in a strange land that she determines must be a dream. 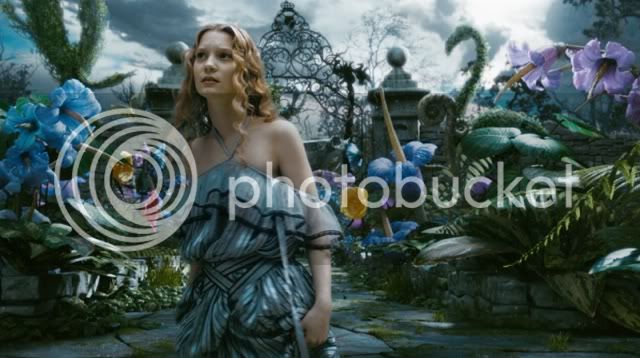 There exist, in this land, a variety of odd fauna and animals.  There are some human-like creatures too, like Tweedledum and his twin, Tweedledee (both Matt Lucas).  There is also the aforementioned white rabbit, a strange cat, a small but feisty mouse, and a bizarre gentleman who happens to be a hatter (Johnny Depp).  As Alice learns more about this strange world she comes to realize there is a war on, pitting the evil Red Queen (Helena Bonham Carter) against her sister, the White Queen (Anne Hathaway).  Also, it appears that Alice has been predestined to lead the fight against the ferocious Jabberwocky (Christopher Lee), however reluctant she may be to take up arms.

There are some thrilling moments in Alice in Wonderland, and some moments of awe and wonder as Alice descends into the mad world of her adventures.  There are a great deal of visual treats, the majority of them coming from the Red Queen’s castle.  The Queen herself, with Helena Bonham Carter’s head gigantically imposed upon a diminutive form, steals every scene in which she appears.  Her shrieks of “Off with his head!” continually amuse, and are varied and sparse enough to not be overly repetitive.  The rest of the characters seem a bit bland, even (I know this is blasphemous to suggest) the Mad Hatter.  The actors are sufficient, and it is nice to see a relatively unknown face like Wasikowksa playing the lead.

The visuals themselves are generally eye-popping, and perhaps even more so in 2D.  I saw the movie in 3D, and while the format added some depth, rarely stood out as being necessary.  But this is a gonzo movie, with every aspect overplayed and over-the-top, so perhaps it is understandable.  However, a few obvious moments involving spears being jabbed at the camera come off as contrived and unnecessary, mere gimmicks to justify the 3D version.  Perhaps the 2D version will be more impressive, with more vibrant colors and sharper contrast.  If given a choice I would suggest the 2D version for an initial viewing.

Alice in Wonderland is, in essence, candy.  It is entertaining and eye-catching, with a serviceable story and characters, but rarely fully engaged me, emotionally or otherwise.  I was glad to see some rather twisted moments in the film, though nothing as twisted as Lewis Carroll’s original stories.  Some scenes are rather frightening and violent or gory; this film might upset children old enough to understand what beheading entails.  Throughout the film I continually hoped for something more, something deeper, though I consistently chuckled whenever the Red Queen appeared.  It is not a bad film, and (as evidenced by a $116 million opening weekend) sure to please the crowds.  But too much time spent in this Wonderland might lead to a sugar rush, especially with as little substance as the film offers.

2 thoughts on “Alice in Wonderland”