On the surface Going the Distance is a perfectly serviceable romantic comedy with an R rating.  It’s aimed at the younger crowd of adults, featuring characters for whom they may feel sympathy, and has enough raunchy scenes that some might accuse it of being a Judd Apatow clone.  But if one were to look a little deeper they might find that the film isn’t actually all that great; some of it is uneven, with certain scenes being almost absolute failures.  But if one were to look deeper still it becomes apparent that these characters ought not be sympathetic because they are, at their cores, rotten.

The film opens as Garrett (Justin Long) is celebrating a birthday with his girlfriend Karen (June Diane Raphael).  His mistake is that he neglected to buy her a present, because she specifically told him not to.  Somehow this 30-ish year old single guy never figured out that girls often mean something other than what they say.

Later that night he’s sitting in the bar with his friends Box (Jason Sudeikis) and Dan (Charlie Day), who also happens to be his roommate.  Over beers and the arcade game Centipede he stumbles upon a similarly dispirited Erin (Drew Barrymore).  She’s a 31 year old intern at the New York Sentinel, and less than optimistic about her chances of achieving her dream of writing at a newspaper.  They hit it off and after some quick sex decide that they had a rather nice time together.  They both outline their plans and hopes for the future; she’s only in New York six more weeks before moving back to San Fransisco for school, and neither of them is looking for a longtime committed relationship.

Naturally, they enjoy sex and getting to know each other more than they might have imagined, and are a bit sad to leave each other at the end of the six weeks.  Thus begins their long distance relationship, one with occasional trips across the country, attempted phone sex, and a lot of frustration, suspicion, and jealousy.

If I were to say that Going the Distance takes few risks you might assume that everything turns out happily in the end, and I doubt this would be a big spoiler.  But that is the problem; everything does turn out happily in the end for these two wretched people.  As much as the film may try to convince the audience otherwise, both of the main characters are shallow and narcissistic, and their eventual (and slight) catharsis does little to change how they are viewed.  Erin is a bit of a slut, and Garrett is a self-centered jerk, incapable of understanding how others feel and want to be treated.  Their unpleasantness makes the big emotional scenes feel distant and cold. 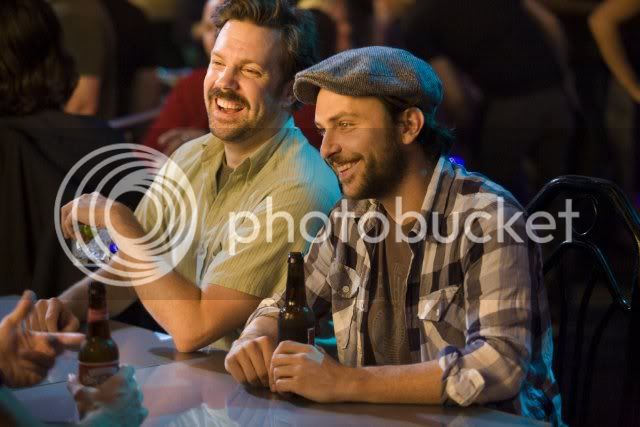 There are some funny moments, to be sure.  Dan steals the show as Garrett’s free spirited roommate.  He plays mood music through the walls for Garrett’s hook-ups, and isn’t afraid to take a dump with the door open even if the living room is right next to the bathroom.  His views on man-hugging and man-crying are similarly humorous, even if his eccentric attitudes towards self-pleasure are a mere shadow of what is presented in Clerks.

Justin Long is effective at playing a nervous, slightly awkward character.  He’s the slightly older Michael Cera, able to communicate a more assured humor along with his stutterings.  Barrymore is effective enough as the raunchy Erin.  Some of the supporting characters are more amusing, with Garrett’s friend Box providing some highlights; his mustache is supposed to be a time machine intended to lure 45-60 year old women for his bucket list of partners.  Erin’s sister Corrinne (Christina Applegate) provides laughs as the experienced and married responsible adult, albeit with a sharp tongue and a fondness for crudity and crassness.

Going the Distance doesn’t take any risks or attempt to present something new or original.  It’s more raunchy than any PG-13 romantic comedy, but rarely bad enough to be a gross-out comedy.  The shallow characters struggle through some rough times, but eventually get to have their cake and eat it, too.  I find little to appreciate in such an approach, one that rewards unpleasant behavior and unpleasant characters whose moments of catharsis are sudden and relatively insignificant.  A number of elements in Going the Distance will appeal to fans of comedies or romantic comedies, and I won’t begrudge that audience their pleasure, no matter how shallow it may be.

3 thoughts on “Going the Distance”