The story may not be well-known to many Americans; it certainly wasn’t to me.  But it is a fascinating story, and, in some ways, a highly significant one.  A king, without power but beloved by his people, must deliver a stirring address as the nation approaches a war with a neighboring state.  But there is a catch, and a not-inconsequential one: he stammers.

The Duke of York, also known as Bertie (Colin Firth), is the second son of King George V (Michael Gambon).  His elder brother, Edward (Guy Pearce), is a philanderer, albeit an eloquent one.  The Great War is fresh in European memories, and a cad named Hitler is threatening trouble in Easter Europe.  King George V is ailing, and soon a successor must rally Great Britain around the government, lending them the support they will need to wage such a conflict.  But this blasted stammer.

Bertie’s wife, Elizabeth (Helena Bonham Carter), is sympathetic and kind.  She has known about his speech impediment for many years, and fell in love with him partly because of it.  They have two daughters, Elizabeth (Freya Wilson) and Margaret (Ramona Marquez), and are as in love as royalty is allowed to be.  She has sought out every manner of professional help for Bertie, but to no avail.  Speech therapy techniques are still infantile, and many doctors and such have had Bertie hold marbles in his mouth and practice breathing techniques and muscle exercises.

After a particularly ill-fated speech in 1925, Bertie and Elizabeth have no hope remaining.  She seeks one last alternative, an odd Australian therapist by the name of Lionel Logue (Geoffrey Rush).  He is peculiar, and demands that his own method of therapy be tried.  Bertie is not convinced at first, but eventually agrees to be helped.  After some time this professional relationship morphs into a strange friendship, the only one royalty such as Bertie can manage.  And, with the experienced Logue’s help, Bertie’s stammer is aided significantly.

There are many fascinating elements to The King’s Speech, not least of which is the historical perspective.  A glimpse into the lives of British royalty, compounded by the complex intertwining of Britain’s religious, political, and royal structures, is complex and engaging.  Simple misunderstandings regarding the royalty of Bertie and Elizabeth are vastly entertaining, particularly when countered with Logue’s Australian stubbornness and nonchalance.  Eventually Bertie must become King George VI, as history demands, and the weight of a kingdom is a tremendous burden.  Other films have captured this, too, such as Henry V [review here], but with a more contemporary script it is easier to sympathize with Bertie.

The King’s Speech is a straight drama, and without the MPAA’s strict rules about the word “fuck” would be deemed suitable for teenagers.  It would certainly be a less violent alternative to all the PG-13 rated action films thrust upon the 13-18 demographic.  As it is, the film works remarkably well as intelligent entertainment for adults.  It is a story simply told, with straight-forward direction and impeccable acting.  There are a large number of close-ups, allowing even greater detail of Firth’s performance to shine through.  He is incredible, with trembling jowls as each word is blocked somewhere between his mind and his mouth.  His stammer is convincing, never over-acted or stereotypical.  He has clearly studied the speeches the real King George VI gave to his kingdom before the start of World War II. 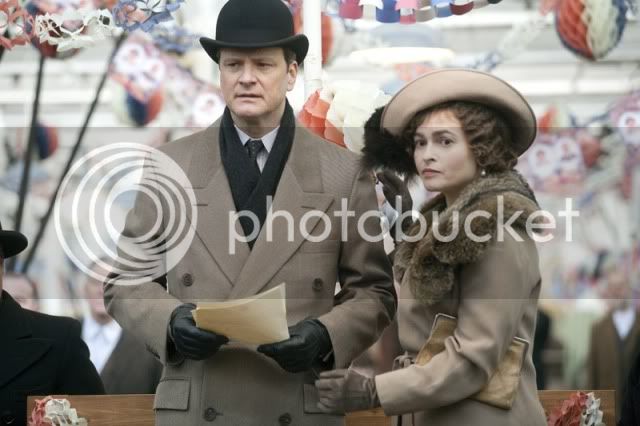 Bonham Carter is superb as a loving, supportive wife who understands that her husband’s first loyalty belongs to the kingdom, and no longer to her and their daughters.  Rush, like Firth, is worthy of an Academy Award nomination (though not as worthy of a victory).  His insistence on treating Bertie with his own methods is consistently humorous, and it is clear that both male leads have great chemistry together on screen.

The story is strong, the production is superbly competent, and the acting nearly sublime.  The King’s Speech has been called Oscar bait, and rightly so, as a period piece with strong performances, an uplifting tale, and an historical setting.  But that doesn’t mean that Oscar bait can’t be greatly enjoyable, and one of the strongest films of the year.

4 thoughts on “The King’s Speech”