The Boy in the Striped Pajamas (2008): United Kingdom/United States – directed by Mark Herman

Rated PG-13 by the MPAA – contains some mature themes

The Boy in the Striped Pajamas has an immediate obstacle to overcome.  While it might not have been practical to film in German, many other World War II films have at least attempted German accents.  Judgment at Nuremberg even utilizes an effective technique to allow characters to speak in English and the audience to believe they’re speaking German.  Here there is not even an attempt; all the Germans speak British English, very properly.  This is a small complaint, but one that taints the entire film.

At the beginning it is difficult to tell if this is London or Berlin, with small children running around the streets, and fancy state dinners replete with silver and china.  But then the father of the primary family announces a transfer to another post, in the country, and it becomes clear that this is the German side of the war.

The father is played by David Thewlis, who is married to Else (Vera Farmiga, rather more British here than in Up in the Air [review here]).  They have two children, a twelve year old girl named Gretel (Amber Beattie) and an eight year old named Bruno (Asa Butterfield, who starred in Nanny McPhee Returns [review here]).  The children are hesitant to leave their home and their friends, but are assured it will be a new adventure.

The house in the country turns out to be something less than an adventure, at least at first.  It’s a bland concrete structure surrounded by wire fences and with numerous soldiers passing through.  Father has been put in charge of an institution, and so must command a number of soldiers.  The place is boring for Bruno, as there are no other children nearby.  After a tutor is brought in Gretel starts to become invested in the Third Reich, and finds purpose there.  Bruno isn’t as interested in his studies, instead finding a connection with the weird farmer who helps around the house and wears strange pajamas.  But everyone else in the house, particularly the soldiers, are not fond of the farmer and treat him rather poorly.

Eventually Bruno manages to escape the confines of the tiny compound.  A trip through the woods to the nearby farmland brings him in touch with another young boy named Shmuel (Jack Scanlon).  This boy wears striped pajamas and sits on the other side of a barbed wire fence.  They strike up a friendship, as Bruno somehow manages to continue escaping without notice.

Elsa struggles, too, particularly when she figures out what type of camp her husband commands.  She wasn’t supposed to know, and her and many other Germans like her nicely illustrate how little the greater German public knew about what their leaders were doing in secluded parts of the country.  As her knowledge deepens, and her marriage starts to crumble, she looks consistently sicklier.

Bruno’s naivety towards Shmuel’s plight is a key element of the film: the audience is supposed to be enlightened about how the Holocaust looked through the eyes of a young boy.  At times it is almost unbelievable how little he understands, but perhaps this is the point.  Some of the film’s themes manage to shine through, but there are enough plot holes that it is hard to be swept up in the basic elements of the story.  How does Bruno manage to disappear so frequently without getting caught?  How on earth can he sit at the edge of a concentration camp, with a guard tower in sight, and not be noticed?  I realize these questions are beside the point, but when such obvious logical difficulties arise it is hard to pay proper attention to the themes of the film.

The ending is another matter entirely.  If a viewer were persuaded by the film, absorbed in the characters and entranced in the story, it might feel like a devastating blow to the gut.  For those having logical issues with the story the ending feels like a sucker punch, with the viewer held back by the obvious emotionality of what happens while the awfulness of the Holocaust repeatedly beats their kidneys.  I applaud the filmmakers for having the gall to pull it off, but it feels dishonestly manipulative. 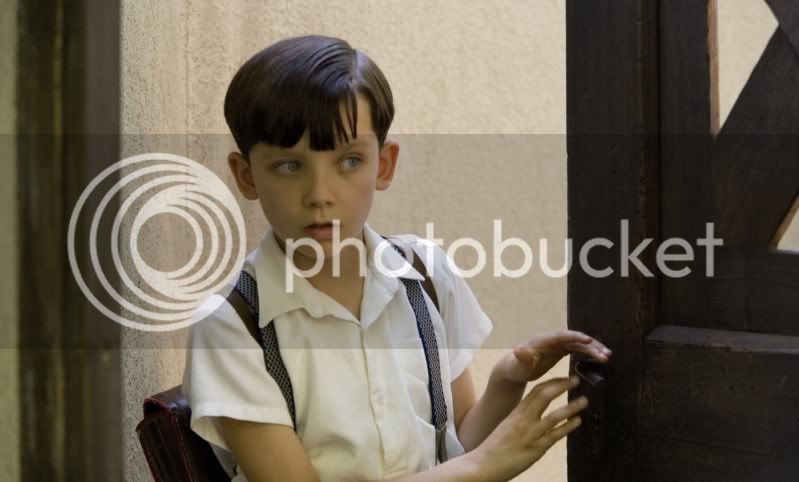 Staging a World War II film on such a budget is impressive.  There are few known actors in the film, and almost every set is scaled back, but it manages to evoke a war setting effectively.  At the same time, other deficiencies arise.  The children are acceptable, and because of them the film is in British English (apparently, and plausibly, it was impossible to find children who could act, speak German, and speak English).  The other acting is likewise adequate.

I suspect the film had a greater impact on audiences upon initial release.  Not knowing anything about the setting would help, as the horrors of the Reich are slowly revealed.  With the passage of time, just knowing the basic setup is detrimental to one’s experience with the film.  Not even knowing the ending, I struggled to believe much of the film, and the absurd ending seemed dishonest.  I realize it is supposed to be a parable, almost, but it is staged too realistically (though illogically) to be taken for parable.  For some viewers the film will resonate, but I was thrown off initially by the sound of British Nazis, and struggled to find any emotional connection to the characters as I was impeded by logical obfuscations and sucker punched by the ending.

3 thoughts on “The Boy in the Striped Pajamas”