The Adjustment Bureau is not a standard sci-fi romantic thriller, as there is an interesting philosophical undercurrent that runs through much of the action.  And while it rarely rises to greatness, a good number of casual discussions will be started by a viewing.  Hard-core movie-goers will perhaps shy away from the simplicity of the themes, but casual seekers of entertainment will find something more to appreciate in the film.

Adapted from a Philip K. Dick short story, The Adjustment Bureau has just the right amount of plot to keep an audience engaged without becoming a science fiction epic.  David Norris (Matt Damon) is an up-and-coming politician.  The film opens as he runs for U.S. Senate, representing the state of New York.  His rough upbringing in Brooklyn has the masses cheering for him, but a slightly indiscreet photo ruins his chances of being elected.  But on the night of the election he runs into a young lady named Elise (Emily Blunt), and a tragic romance begins.

END_OF_DOCUMENT_TOKEN_TO_BE_REPLACED

Adam is a fairly conventional romantic dramedy, albeit one with a slight twist.  The poster proclaims that it is a story about two strangers, one a little stranger than the other.  This may be true, as the titular Adam (Hugh Dancy) has been diagnosed with Asperger’s syndrome (a label that may soon no longer be diagnosed, as it will perhaps be described as simply autism, albeit high functioning).  And while this small twist does make for a slightly elevated telling of a conventional romantic drama, it isn’t enough to make the film entirely memorable.

At the beginning of the film Adam loses his dad, though he doesn’t react as most NT’s (neuro-typicals) might in the same situation.  He doesn’t cry, doesn’t emote at all.  He simply goes home and continues his life, going to work at a toy company where he is able to practice his electronic engineering skills in relative isolation.

END_OF_DOCUMENT_TOKEN_TO_BE_REPLACED

Rated PG-13 by the MPAA – contains some language

When writing about Blue Valentine [review here] I commented that few films these days mention staying in love, as it is so popular to fall in love, over and over again.  My comments may have been short-sighted, even if Another Year does not entirely nullify the sentiment.  Another Year contains a long-married couple who are the roots of the film, surrounded by a great deal of rotten fruit.  But even this rotten fruit is portrayed honestly, and tragically, and with such a surprisingly old, happy married couple at the core the film is well worth the time for viewers interested in character dramas.

Mike Leigh’s newest film is certainly a character drama.  There are events that happen during the course of the film, but little in the way of plot.  Instead the film charts out a number of happenings over the course of a year in the life of Tom (Jim Broadbent) and Gerri (Ruth Sheen).

END_OF_DOCUMENT_TOKEN_TO_BE_REPLACED 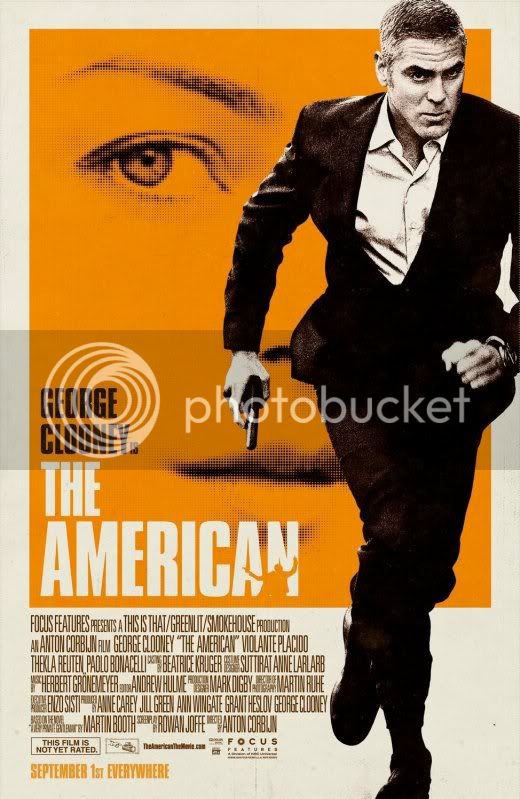 The American moves slowly, which makes for a pleasurable experience when filmed by someone with a photographer’s eye, such as Anton Corbijn.  A multi-national production (though financed with American funds), the film slowly explores a variety of themes through a simple story revolving around Jack.

Jack (George Clooney) is a hit man.  He is first introduced at an isolated chalet on the edge of a frozen Swedish lake.  He is accompanied by a lovely friend, Ingrid (Irina Björklund), but their relationship is brought to an abrupt halt.  Finding himself less than welcome in Sweden, Jack heads to Rome, where he is given new instructions; he is to hole up in a small hillside village and wait.

END_OF_DOCUMENT_TOKEN_TO_BE_REPLACED

Alpha and Omega, despite some high profile voice actors and the melancholy accompanying it due to Dennis Hopper’s death, ultimately falls flat as an animated feature and a family film.  There are enough cute moments to entice younger children, but then why is there so much innuendo and so many butt jokes?

The story itself is a little on the tame side.  Kate (Hayden Panettiere) and Humphrey (Justin Long) are introduced in the opening scenes, cavorting and having fun together as young wolves are apt to do.  But even at an early age they realize that they won’t be able to be together, as Kate is an alpha wolf in training under the tutelage of her father, Winston (Danny Glover), who is the clan leader.  And Humphrey is an omega, the stupidest of the stupid wolves.  He’s forced to hang out with lame friends (even though he likes them) and the only girl wolves he can hope to get are the berry-loving vegetarian organic types.

END_OF_DOCUMENT_TOKEN_TO_BE_REPLACED

All About Eve (1950): United States – directed by Joseph L. Mankiewicz

Not rated by the MPAA – contains wittiness and extreme bitterness

It is quite remarkable how well All About Eve has withstood the pressures and passage of six decades.  It is all the more incredible given that it was nominated for fourteen Oscars and won six.  Neither before nor since has their been such a witty, biting attack on fame, stardom, and the theater.  The fact that the Academy looked so highly on the film makes its themes even more ironic and delicious.

The film is constructed of four strong central characters, and a bevy of supporting acts.  First is Margo (Bette Davis), an aging actress.  She is the queen of the stage, admired by everyone around her.  Her fears of soon becoming old and discarded are not assuaged by the sudden appearance of Eve (Anne Baxter), a young woman who idolizes and attempts to ape Margo’s every move and gesture.  Eve is initially helped by Karen (Celeste Holm).  Karen is a close friend of Margo, and her husband, Lloyd Richards (Hugh Marlowe) is Margo’s leading playwright.  Lloyd’s role is slightly less substantial, leaving room for theater critic Addison DeWitt (George Sanders) to claim the fourth key role.

END_OF_DOCUMENT_TOKEN_TO_BE_REPLACED

Rated PG by the MPAA – contains violence, some grisly images, and some scary moments.  The smoking caterpillar is incidental

It has been plain, from the moment initial word of this project landed, that Tim Burton would add something unique and twisted to Wonderland.  He has not disappointed visually, with a rich and vibrant world featuring all manner of Lewis Carroll’s original creatures.  What is, perhaps, slightly disappointing is that the film never transcends Wonderland and the odd assortment of creatures and behaviors therein.  Nevertheless, Alice in Wonderland is not a bad film, and is in fact rather good and fairly enjoyable.

There is a story to accompany Alice and her adventures.  Alice’s Adventures in Wonderland purists need not be worried, as the film acts as a sort of sequel to any previous events.  It is set as Alice (Mia Wasikowska) approaches her twentieth birthday.  Her father, a great businessman and explorer, has died some years prior, and she and her mother are on their way to a grand party thrown by nearby aristocrats.

END_OF_DOCUMENT_TOKEN_TO_BE_REPLACED

Not rated by the MPAA – contains suggestive material, outrageous attacks on the church and fascism, and violence/blood

When was the last time a filmmaker has been as audacious as this, as bold, nervy, and ballsy? Hardly any filmmakers have reached the heights at which Luis Buñuel set the benchmark in 1930 with L’âge d’or.  It is no surprise that he was no stranger to extremely provocative filmmaking, having created Un Chien Andalou with Salvador Dalí the previous year.

The directing is rudimentary and basic, understandable given the young age of the medium.  Montage had only recently been explored, with its cousin juxtaposition along for the ride.  Buñuel makes bold use of the techniques, flashing images of an undisturbed bourgeois dinner party adjacent to shots of the maid, falling out of the kitchen door having been burned to death.

END_OF_DOCUMENT_TOKEN_TO_BE_REPLACED

Rated PG-13 by the MPAA – contains violence, some language, and mostly-naked blue aliens

Avatar has been a long time coming.  The hype has been enormous, the marketing blitz intense.  Judging from both critical reviews and word-of-mouth, it would appear that the film has lived up to the enormous expectations.  This is something perhaps only James Cameron could have accomplished.

Will Avatar be viewed as a major stepping stone in the history of cinema?  Perhaps.  I wouldn’t be surprised if it leaves a mark on future generations much like the mark Star Wars left in the 1970’s.  Is Avatar deserving of such a distinction?  Perhaps.  I wonder if people viewing Avatar ten years from now will be as forgiving of its faults as people are watching Star Wars decades after its release.

END_OF_DOCUMENT_TOKEN_TO_BE_REPLACED

Note: There are some mild spoilers in this review.  It also discusses a few disturbing aspects of the film, though not all of them.

You’ve probably heard a lot about the controversy surrounding Antichrist, about its graphic content and obscene images.  It certainly is provocative in its imagery and does not shy away from graphically displaying certain acts, but unlike a generic exploitation film it offers much more.  In addition to being artistically presented it is also one of the most terrifying movies I’ve seen in years.

There are only two speaking roles in the entire film.  They are credited as He (Willem Dafoe) and She (Charlotte Gainsbourg).  In the epilogue (named and titled, like all of the chapters in the film) they are busy fulfilling their marital duties.  Unfortunately, they are too caught up in each other to notice their son as he steps out of the window and crashes to the ground.  The entire scene is shot like an art film, entirely in slow motion black and white, with an operatic choir providing the music.