Sliding Doors is a bit of a different romantic comedy, in a couple of ways.  To begin with, it adds a slight supernatural or science fiction gimmick to its plot, though this has been done before (and more proficiently, in Brad Anderson’s Happy Accidents).  Secondly, it is remarkably tragic in a number of ways, and is surprisingly light on the comedic aspect of the genre.  There are a number of cute moments, some humor, and some interesting plot devices, but Sliding Doors ultimately cannot follow through on its more lofty goals of being a cerebral rom-com.

Gwyneth Paltrow is cute and tiny as Helen.  Her job is PR, in London, and on one fateful day her world is split in two, almost literally.  After leaving the flat she shares with her boyfriend, aspiring author Gerry (John Lynch), she arrives late for work and discovers she has been sacked for stealing bottles of vodka (Smirnoff; it shouldn’t be surprising that the brand responsible for changing the fundamental nature of martinis with the help of Bond films has managed to pop up here).  Dejected she leaves work, bumping into James (The Mummy’s John Hannah, here less amusing and slapsticky) in the elevator.  Arriving at the train station she finds herself running late, and the doors close before she gets there.

END_OF_DOCUMENT_TOKEN_TO_BE_REPLACED

Note: I attended an early preview screening, and I am unsure whether the film was in its final, finished form.  The print I saw ran just under two hours in length and was rated PG-13.

Mark Zuckerberg is an antihero for the new generation of young adults.  He is narcissistic, bitter, angry, and brilliant.  He is brooding, lonesome, witty, and incredibly successful.  Most of all, he understands “cool” as it pertains to the internet age, well before any of the suits could get their heads wrapped around the concept.

Jesse Eisenberg is Zuckerberg in The Social Network.  He is nervous and fidgety, but supremely confident in his words and his methods.  As the film opens he is a sophomore at Harvard.  His opening date with Erica (Rooney Mara) is a disaster; he picks at her words and deals a number of backhanded compliments.  Once he’s been rightfully dumped for being an insensitive cad, he returns to his dorm and blogs about Erica on LiveJournal.  As he types and drinks he hits upon a new idea.  He’ll create a website that allows users to choose one girl over another, rating their hotness.  When the site is finished later that night Zuckerberg watches as traffic streams in and crashes the Harvard servers.

END_OF_DOCUMENT_TOKEN_TO_BE_REPLACED

Rated PG-13 by the MPAA – contains cartoony violence, some sexual content and themes, and some language 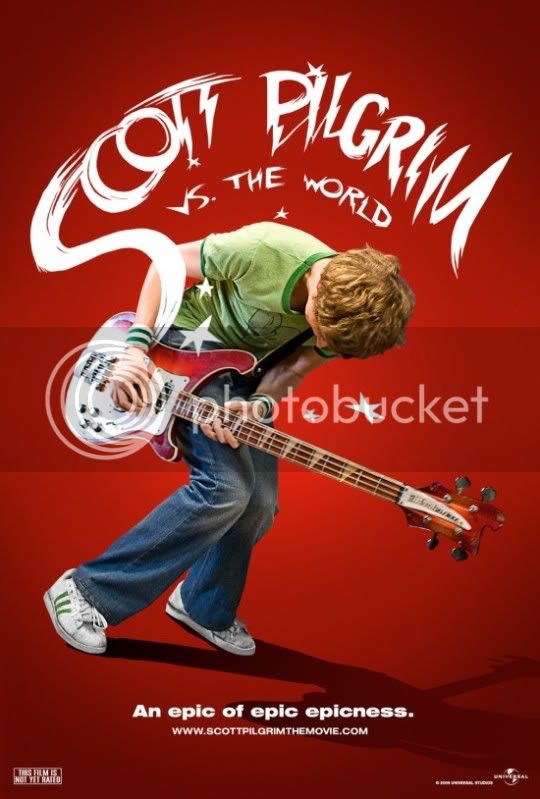 Scott Pilgrim vs. the World opens on the perfect note: an 8-bit approximation of the Universal Pictures logo as it might have appeared on the SNES, accompanied by a MIDI soundtrack of the Universal theme.  Then, as soon as the characters are introduced with on-screen stats and graphics, it becomes clear that the entire movie will be a mash-up of video game and comic book.

For anyone familiar with Edgar Wright’s work, this should be no surprise.  As far back as “Spaced,” one of the greatest modern television series, Wright displayed a unique panache for visual flair and transitions.  With a limited television budget and a compressed schedule he managed to imbue his comedy about two jobless flat inhabitants in a familiar England with a pop sensibility rarely rivaled.  It was clear from the beginning that Wright’s geekdom was supreme.

END_OF_DOCUMENT_TOKEN_TO_BE_REPLACED

The Snake Pit is primarily a star vehicle for Olivia de Havilland.  Two male stars round out the majority of the speaking roles, leaving the rest of the cast not more than a couple lines apiece.  This isn’t necessarily a bad thing, however, as Olivia effectively pulls off a mentally unstable woman trapped in an exceedingly difficult mental health system.

The opening scene does little to give away the plot.  Virginia (de Havilland) sits on a bench, alone.  But then a man speaks to her, and she is confused.  Eventually, the lady next to her also speaks to her, but she doesn’t know why.  Then she is led into a large building with big, strong doors, and is scared.  “Why am I in prison?” she wonders.  Upon talking to a couple different people inside, she figures she must be researching a novel, because she’s a writer.  But then she is introduced to a man who claims to be her husband.  Frightened, confused, she shrinks away; she remembers being married, but can’t recall a husband.

END_OF_DOCUMENT_TOKEN_TO_BE_REPLACED

Shutter Island might be considered Martin Scorcese’s foray into horror/psychological thriller territory, with elements of everything from Rosemary’s Baby, Jacob’s Ladder, the “Silent Hill” games, and H.P. Lovecraft.  To add further influences, the novel on which the film is based is written by Dennis Lehane, the author of the Gone Baby Gone and Mystic River novels.  Finally, the screenwriter is Laeta Kalogridis, whose myriad projects include executive producing on Avatar [review here], writing Pathfinder and Alexander, and also drafting the screenplay for Night Watch, one of Russia’s highest grossing films.

One might think that such a bizarre mix of influences could lead to a disjointed picture, but that’s not the case; Shutter Island manages to stay focused on its tale of supposed madness.  Without this excuse, however, it is even harder to admit that the film just isn’t very good.  There are amazing elements, to be sure, but it is also rather bloated and laden with a variety of technical issues.  To discuss the plot and some of the film’s flaws, there may be some spoilers ahead.

END_OF_DOCUMENT_TOKEN_TO_BE_REPLACED

Rated PG-13 by the MPAA – contains some language, mature themes, and a little sexual content

Seven Pounds is a bit of a confused and broken movie. It starts out deliberately so, with flashbacks and a foggy exposition. By the time things start making sense the story becomes less interesting and it is increasingly difficult to empathize with any of the primary characters.

There is one main character, Ben Thomas (Will Smith).  At the beginning of the film he is making a phone call to 911, informing them that there has been a suicide and they need to send an ambulance.  “Whose suicide?” They ask.  “Mine,” he replies.  At this point the movie starts jumping around chronologically.  It is, at first, difficult to tell what scenes are in the present as the movie takes no pains to explain anything.  Eventually the narrative calms down and it becomes clear that certain scenes are flashbacks, though by this time any mystery has been eliminated.

END_OF_DOCUMENT_TOKEN_TO_BE_REPLACED

Rated R by the MPAA – contains language, some violence, and some sexual material

People love the film, even if the Academy couldn’t provide it with anything more than seven nominations.  It has become oft-quoted, and many people will claim it as their favorite movie of all time.  And rightfully so; it is a very good film, an uplifting experience, and a genuine crowd-pleaser.

END_OF_DOCUMENT_TOKEN_TO_BE_REPLACED

Not rated by the MPAA – contains some language, violence, gore, scariness, pretty colors

Dario Argento, back in 1977, made murder beautiful.  With his shockingly gorgeous giallo film Suspiria he set a high mark for art in horror films, a level which has not since been approached.  The film varies between terrifying and entrancingly gorgeous, an odd and interesting combination.

The opening sequence is evocative and atmospheric.  A young lady named Suzy Bannion (Jessica Harper) disembarks at an airport and ventures through driving rain to find a taxi.  She is mostly alone at the airport, walking down bright blue hallways.  The camera moves slowly and lingers as she approaches the automatic door, then jarringly cuts to the door’s mechanism bursting open.  Suzy takes the taxi to a ballet school, where a scared young woman is hurriedly leaving.  Suzy tries to gain admittance but is denied: she is forced back into the taxi to find another place to stay for the night.  Meanwhile, the scared girl runs through the woods in an amazingly lit scene where the car’s headlights are the only light source.

END_OF_DOCUMENT_TOKEN_TO_BE_REPLACED

Not rated by the MPAA – contains all manner of bizarre and aberrant behavior, violence, sex, various taboo material

Shinjuku Triad Society is Takashi Miike’s first theatrically released film and the first part of the Black Triad Trilogy.  With its unique mix of bizarre and extreme violence and taboo sexual material, it would go on to characterize much of his filmography.  While it is not as polished or as highly-budgeted as some of his better known films, like Audition or Ichi the Killer, and doesn’t contain quite as much pure exuberance in its content, it is still an interesting and strange film.

There may be a plot, though it is hard to fully discern storylines and characterizations in many of Miike’s films.  It is a Yakuza film, like much of Miike’s work, and features a cop whose dealings are sometimes nearly as suspect as the gangsters’.   A raid at a nightclub opens the film, and it ends rather violently.  A cop’s throat is slashed by a male prostitute who may have connections to a local triad.  A girl is taken into custody and interrogated, with a chair used as encouragement.

END_OF_DOCUMENT_TOKEN_TO_BE_REPLACED

Not rated by the MPAA – contains some violence and mature themes

Sergeant York is a simple tale, perhaps, one of a patriotic, religious farmer.  It’s a tale of conversion and catharsis, war and peace, love and violence.  The first hour sets up the characters and the settings before the reality of the Great War come into play.  It seems that Howard Hawks intended the film to be propaganda, as the United States hadn’t quite entered the second World War at the time it was made.  Fortunately the message isn’t as simple as the story and the filmmakers seem to take a little time to consider the ramifications of patriotism.

Alvin York (Gary Cooper) is a young troublemaker in a small valley town in Tennessee.  He rides hard, drinks hard, and shoots hard.  The beginning of the film has him disrupting a church service, embarrassing his proud mother (Margaret Wycherly).  The local pastor (Walter Brennan), who also runs the general store, is sure that Alvin just needs a bit of religion in his life.

Alvin may drink hard, but he works hard.  He works the land, his hill-side land that’s strewn with rocks and quite difficult to provide any sort of lucrative yield.  He wants to acquire some valley land and better provide for his ma and two young siblings.  There’s also a pretty lass down the way that could use an established gentleman as a husband.  Gracie (Joan Leslie) is sweet and honest, but has other suitors beside Alvin.  However, Alvin’s violent outbursts and nefarious dealings when it comes to love turn her off.