Adam is a fairly conventional romantic dramedy, albeit one with a slight twist.  The poster proclaims that it is a story about two strangers, one a little stranger than the other.  This may be true, as the titular Adam (Hugh Dancy) has been diagnosed with Asperger’s syndrome (a label that may soon no longer be diagnosed, as it will perhaps be described as simply autism, albeit high functioning).  And while this small twist does make for a slightly elevated telling of a conventional romantic drama, it isn’t enough to make the film entirely memorable.

At the beginning of the film Adam loses his dad, though he doesn’t react as most NT’s (neuro-typicals) might in the same situation.  He doesn’t cry, doesn’t emote at all.  He simply goes home and continues his life, going to work at a toy company where he is able to practice his electronic engineering skills in relative isolation.

END_OF_DOCUMENT_TOKEN_TO_BE_REPLACED 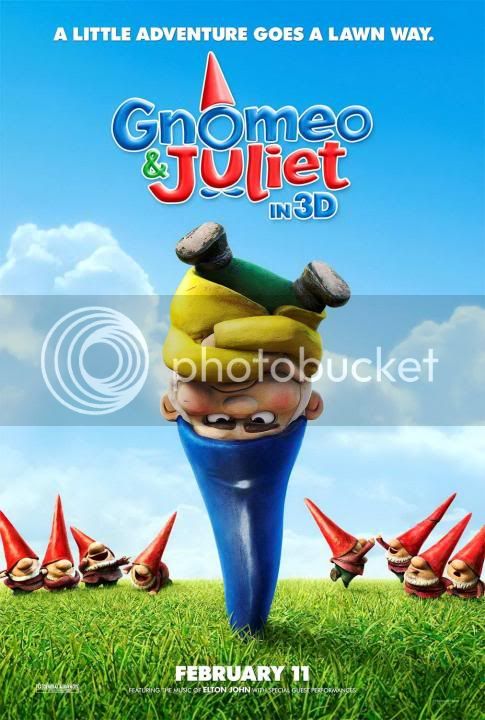 Gnomeo and Juliet.  The title says it all.  Really, what title has ever been more descriptive of a film, other than perhaps The Incredibly Strange Creatures Who Stopped Living and Became Mixed-Up Zombies!!? This is the tale of Romeo and Juliet, as told by garden gnomes in England.  Naturally, a children’s film such as this cannot end as tragically as the Bard intended, a fact the Bard himself addresses in one of the film’s most humorous moments.  Unfortunately, the rest of the film is as not-particularly-good as the title suggests.

There are humans in the film, but they are never fully revealed.  There is a Capulet and a Montague, and their houses are attached.  But they are also painted strikingly different colors.  There is red on one side, and blue on the other, even down to the shared chimney stack.  The neighbors hate each other, almost as much as their respective garden gnomes hate each other.

END_OF_DOCUMENT_TOKEN_TO_BE_REPLACED

The Chronicles of Narnia: The Voyage of the Dawn Treader (2010): United States – directed by Michael Apted

This third entry into the Chronicles of Narnia series has a new distributor, and a smaller budget, but this is not immediately evident.  After Prince Caspian failed to live up to its enormous budget, Disney dropped the Walden Media production, and Fox picked it up.  Thus, The Chronicles of Narnia: The Voyage of the Dawn Treader comes to us courtesy of Fox Walden.

I have not read the Narnia books in many years, and will take other’s word that this entry includes some of the plot of Dawn Treader, with some other strains from The Silver Chair.  Nevertheless, the plot here is rather straightforward.  Lucy (Georgie Henley) and Edmund (Skandar Keynes) are the two remaining Pevensie children, stuck in England during the war.  Peter and Susan are in America, along with their parents.  So Lucy and Edmund stay with their cousin, Eustace (Will Poulter), a whiny, petulant boy who sneers at their fanciful notions of Narnia and its magic.  Naturally, a painting on the wall starts pouring water as they fight, and they are all sucked into the sea.

END_OF_DOCUMENT_TOKEN_TO_BE_REPLACED

The Boy in the Striped Pajamas (2008): United Kingdom/United States – directed by Mark Herman

Rated PG-13 by the MPAA – contains some mature themes

The Boy in the Striped Pajamas has an immediate obstacle to overcome.  While it might not have been practical to film in German, many other World War II films have at least attempted German accents.  Judgment at Nuremberg even utilizes an effective technique to allow characters to speak in English and the audience to believe they’re speaking German.  Here there is not even an attempt; all the Germans speak British English, very properly.  This is a small complaint, but one that taints the entire film.

At the beginning it is difficult to tell if this is London or Berlin, with small children running around the streets, and fancy state dinners replete with silver and china.  But then the father of the primary family announces a transfer to another post, in the country, and it becomes clear that this is the German side of the war.

END_OF_DOCUMENT_TOKEN_TO_BE_REPLACED

The story may not be well-known to many Americans; it certainly wasn’t to me.  But it is a fascinating story, and, in some ways, a highly significant one.  A king, without power but beloved by his people, must deliver a stirring address as the nation approaches a war with a neighboring state.  But there is a catch, and a not-inconsequential one: he stammers.

The Duke of York, also known as Bertie (Colin Firth), is the second son of King George V (Michael Gambon).  His elder brother, Edward (Guy Pearce), is a philanderer, albeit an eloquent one.  The Great War is fresh in European memories, and a cad named Hitler is threatening trouble in Easter Europe.  King George V is ailing, and soon a successor must rally Great Britain around the government, lending them the support they will need to wage such a conflict.  But this blasted stammer.

END_OF_DOCUMENT_TOKEN_TO_BE_REPLACED

Without star turns by Sam Rockwell and Hillary Swank, Conviction wouldn’t be nearly as powerful.  A prime example of a concept and story greater than its execution on celluloid, Conviction tells the story of Betty Anne Waters.  Her remarkable true story took her on an 18 year quest to become a lawyer and fight for her brother’s release on a murder conviction.

The story is told linearly, but with varying flashbacks highlighting important aspects of the relationship between Betty Anne (Swank) and her brother Kenny (Sam Rockwell).  They grew up in trailer parks and foster care, white trash in eastern Massachusetts.  They got in trouble together, stealing candy and breaking into old people’s homes.  Kenny took most of the heat, and by the time he was a young adult he was on a first-name basis with the entire police force.  But then, in 1980 in the town of Ayer, a bloody shack was discovered with a dead body inside.  The usual suspect was rounded up, and soon all the evidence gathered by local law-woman Nancy Taylor (Melissa Leo) points towards Kenny’s guilt.

END_OF_DOCUMENT_TOKEN_TO_BE_REPLACED

On the surface Going the Distance is a perfectly serviceable romantic comedy with an R rating.  It’s aimed at the younger crowd of adults, featuring characters for whom they may feel sympathy, and has enough raunchy scenes that some might accuse it of being a Judd Apatow clone.  But if one were to look a little deeper they might find that the film isn’t actually all that great; some of it is uneven, with certain scenes being almost absolute failures.  But if one were to look deeper still it becomes apparent that these characters ought not be sympathetic because they are, at their cores, rotten.

The film opens as Garrett (Justin Long) is celebrating a birthday with his girlfriend Karen (June Diane Raphael).  His mistake is that he neglected to buy her a present, because she specifically told him not to.  Somehow this 30-ish year old single guy never figured out that girls often mean something other than what they say.

END_OF_DOCUMENT_TOKEN_TO_BE_REPLACED

It is a pity that Thirteen Days is not a better film, for the subject matter is exceedingly fascinating.  It is based on the true story of how the White House had to deal with a threat closer and more dangerous than any they had experienced before, but some of the technical aspects of the production bog down the story and prevent the film from having the power that it should.  Some of the intensity of the situation and the enormous impact the players’ decisions had is worthy of a better treatment than afforded here.

Kenny O’Donnell (Kevin Costner) is the President’s top aide in 1962.  John F. Kennedy (Bruce Greenwood) is in the White House, and Kenny and his brother Bobby (Steven Culp) are his most trusted advisers.  It is the height of the Cold War, and direct conflict with Russia is a constant worry.  Then a U2 pilot makes a run of the recently Communist Cuba and discovers something frightening: missile silos that ought not be there.

END_OF_DOCUMENT_TOKEN_TO_BE_REPLACED

A League of Their Own (1992): United States – directed by Penny Marshall

A League of Their Own is a nice movie, a pleasant movie, a Hollywood movie.  It doesn’t take risks, doesn’t alienate its audience, and doesn’t provide any controversial material.  It tells a simple tale with some obvious themes, and it does it perfectly well.  This is why the film has achieved a certain status as a fan favorite.

The story is based on real-life occurrences during World War II.  Most of the athletic young men were away at war, leaving professional baseball devastated.  Walter Harvey (Garry Marshall, director Penny Marshall’s brother) is a candy man, well known for his Harvey Bars.  He’s a bit of a showman as well, eager to lure crowds back to once-packed baseball stadiums.  His hope is that a new league, one filled with attractive dames, will woo a war-weary audience back into the seats.

END_OF_DOCUMENT_TOKEN_TO_BE_REPLACED

The 2005 remake of House of Wax is a singular brand of generic film.  It was made, and exists, only to be seen briefly when released and then forgotten.  No effort was made, and most likely not intended, to ensure the film would stand the test of time.  The film does everything it needs to do to cover all its bases, with the aim of a quick, short, and hopefully profitable run at the box office (though the $30-$40 million budget would belie any intention of a quick turnaround).